With this impressive tour, you will explore the major Mughal destination…

The Taj Mahal, a symbol of the endless love of the Mughal Emperor Shah Jahan for his beloved wife, Mumtaz. 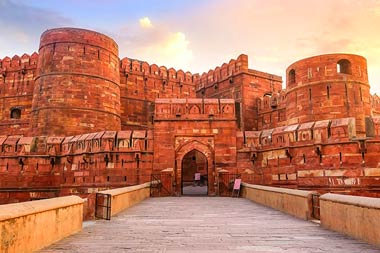 Agra Fort: his old castle made out of red sandstone. It was the main residence of Mughal Emperors for almost a century

Itimad-ud-Daula, also known as « Baby Taj Mahal »: this mausoleum was built by the then Mughal Emperor Jahangir’s wife, Nur Jahan, for her father.

This monument shelters the tomb of Mughal Emperor Akbar, the grandfather of the Shah Jahan, who built the Taj Mahal.

The “Taj mahal day Tour” is a variant tour of “Same Day Agra Tour by car“. and it will allow you to discover the multiple treasures of Agra, picking you up from your doorstep in Delhi with a comfortable AC car and bringing you back to the drop location of your choice at the end of the day. Throughout the day, you will be guided by an experienced English speaking guide, native of Agra, who will make sure that you won’t miss any exclusive anecdote of the secret of the city. After your tour drop you back at your desired location in Delhi, and Taj Mahal day Tour from Delhi ends here!

The exact details and program have to be discussed according to your wishes, your travel plans, and your time constraints.

Why should I book a Taj Mahal Tour from Delhi?

Toggle content goes here, click edit This tour will introduce you four Mughal structures in Agra, one of the most historic cities of Northern India. It show you the beautiful symmetry of the Taj Mahal, the residential palace of Mughal era called Agra Fort, the mausoleum of the famous third mughal emperor, Akbar the Great, and, last but not least, the mausoleum of Itimad-ud-Daula which is shaped like a jewel box.button to change this text.

How many attractions can I explore in this tour?

You will be able to explore the four major attractions of the city of Agra in this tour ; Taj Mahal, Agra fort, Itimad-Ud-Daula and Akbar’s Tomb. This “Taj Mahal Tour from Delhi” will therefore allow you to visit the biggest highlights of Agra.

Can I book this tour in advance? How?

Yes, of course, you can book this tour in advance and it is very easy to do so. You just need to go and click on the option “Book this tour”, fill your details and you will get an instant confirmation of booking.

What is allowed and what is not allowed in Taj Mahal?

For security purposes, we are not allowed to carry any eatables and smoking items, alcoholic items, any juice or soft drinks, laptop, tripods, flags, any fire box. But we are allowed to carry cameras, mobile phones, wallet, ladies purses, drinking water, keys etc.

When is Taj Mahal closed?

Be aware that Taj Mahal is closed every Friday.

Are there any charges to cancel a booking?

You will be picked up by our driver from your desired location in Delhi to proceed to Agra.

The Taj Mahal, a symbol of love, was built by the fifth Mughal emperor Shah Jahan for his beloved
wife, Mumtaz.

You are going to have delicious Mughlai, North Indian, and local food of Agra, depending on your food preferences.

You will get an opportunity to explore the local market of Agra.

It is the mausoleum of Nur Jahan's parents. Nur Jahan was the wife of the fourth Mughal emperor, Jahangir.

The Akbar's Tomb was started to be built by third Mughal Emperor Akbar himself, but it was completed by his son Jahangir. This mausoleum is the best blend of Islamic, Hindu, Christian, Buddhist, and Jain art.
After this last stop, you will proceed back to Delhi.

You will be dropped back in Delhi at your desired location. We hope that you will have an amazing experience through "Dream India Trip"